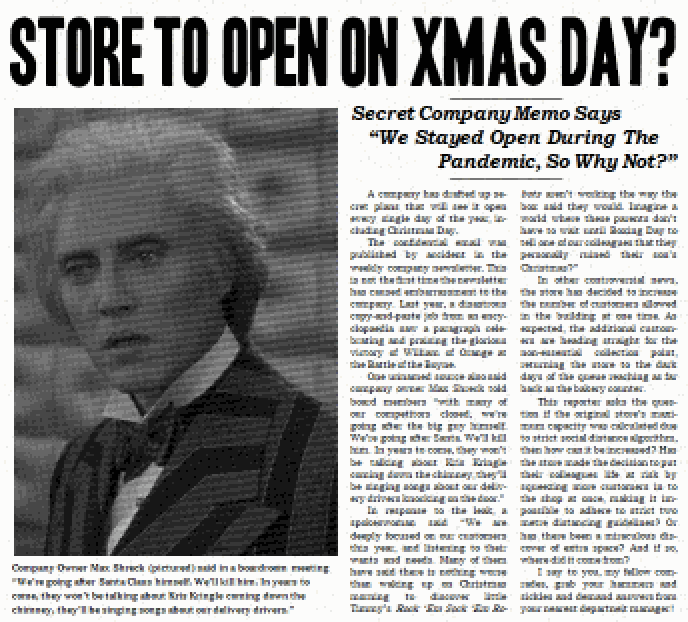 "Store to Open on Xmas Day?"

Shreck's Department Store has drafted up secret plans that will see it open every single day of the year, including Christmas Day.

The confidential e-mail was published by accident in the weekly company newsletter. This is not the first time the newsletter has caused embarrassment to the company. Last year, a disastrous copy-and-paste job from an encyclopaedia saw a paragraph celebrating and praising the "glorious victory" of William of Orange at the Battle of the Boyne.

One unnamed source also said company owner Max Shreck (pictured) told board members "with many of our competitors closed down, we're now going after the big guy himself. We're going after Santa. We'll kill him. In years, they won't be talking about Kris Kringle coming down the chimney, they'll be singing songs about our delivery drivers knocking on the front door."

In response to the leak, a spokeswoman said "We are deeply focused on our customers this year, and listening to their wants and needs. Many of them have said there is nothing worse than waking up on Christmas morning to discover little Theodore's Rock 'Em Sock 'Em Robots aren't working the way the catalogue said they would. Imagine a world where these parents didn't have to wait until Boxing Day to tell one of our colleagues that they personally ruined their son's Christmas?"

In other controversial news, the store has decided to increase the number of customers allowed in the building at one time. As expected, the additional customers are heading straight for the non-essential collection point, returning the store to the dark days of the queue reaching as far back as the bakery counter.

This reporter asks the question, if the original maximum capacity was calculated due to a strict social distancing algorithm, then how can it be increased? Has the store made the decision to put their colleagues' lives at risk by squeezing more customers in to the shop at once, making it impossible to adhere to the recommended two metre distancing guidelines? Or has there been a miraculous discovery of extra space? And if so, where did it come from?

I say to you, my fellow comrades and comradettes, grab your hammers and sickles and demand answers from your nearest department manager!

Back to the filing cabinet